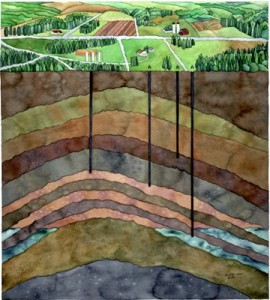 In most countries of the world all mineral resources belong to the government. This includes all valuable rocks, minerals, oil or gas found on or within the Earth. In the United States ownership of mineral resources was originally granted to the individuals or organizations that owned the surface.

These property owners had both “surface rights” and “mineral rights”, the complete ownership which is known as a “fee simple estate”. The landowner holds title to the surface of the land, the space above it, and the subsoil below it (all the way down, in a narrowing pie-shaped wedge, to the center of the earth).

He also owns any minerals contained in the land. To him alone belong the rights to explore, dig, drill, produce, and benefit from minerals on his estate. Mineral rights also include the rights to any oil and natural gas that exist beneath a property. The rights to these commodities can be sold or leased to others. In most cases, oil and gas rights are leased.

If he does sever or separate his interests, he creates a surface estate and a mineral estate. These are then considered to be separate estates, legally speaking. They may be sold to separate owners, leased to separate companies or individuals, and divided again and again as they are conveyed (transferred) for various purposes.